Every book has a life, and I am sad to say that another of my books has joined the others that have “passed.” I wrote Passage: A dog’s journey west with Lewis and Clark to share the Corps of Discovery adventure with kids. I wanted to make the book interactive and engaging so I wrote it as an activity book in which readers were asked questions and invited to add to illustrations. Because it was not a “traditional” book, none of the “traditional” publishers I queried were interested.

All the rejections left me in a quandary. Should I try more publishers? Or, should I just let it go and move on to other things? That’s really hard to do when you are invested in a project, but I was at the end of my publisher list.

Fortunately, I explored another option: producing the book myself. Now this was 2002, before CreateSpace and other popular print-on-demand options that are available today. More importantly, it was also before self-publishing had gained the acceptance that it now has.

I had experience working with publishers, having had some 20 books already published. But I was out of my element in the self-publishing world. However, I went for it anyway and proceeded to find an illustrator, designer, and a printer. In order to keep the per-item cost down, I had to have 2,000 books printed, which was quite a blow to my savings account. And that was just the beginning. I then had to sell all the books in order to make my money back and, if possible, earn some money for my efforts.

Fortunately again, it was around the time the nation was commemorating the Lewis and Clark expedition, so there was a lot of interest in the topic. I sold the books to bookstores and museums and Lewis & Clark organizations. I sold class sets of them to teachers. When the Oregon National Guard became interested in the books for their outreach program, we did another press run of 2,000 books!

The books kept selling, and when the inventory of books became low, a small publisher wanted to produce more copies. Well, of course! When their inventory got low they decided not to print more. They gave me the remaining copies and I continued to sell them, the last sales going to Camp Wood in Illinois (where L&C started their journey) and Fort Clatsop in Oregon (the western end of their journey). Fitting, huh?

So now the books are gone (I kept one of each printing as mementos) but the experience of doing this project from idea to sales will remain with me for a long, long time. 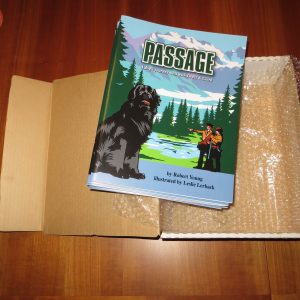