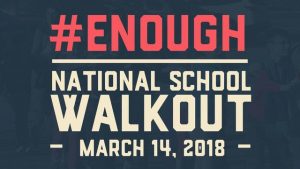 When the students at Briggs Middle School in Springfield, Oregon walked out of class at ten o’clock this morning, I walked with them. I was at the school to do an author visit and speak to students about writing. It was near the end of my presentation when the walkout took place, and I was happy to participate. Some things are more important than writing.

The Briggs students joined students from all cross the country in leaving their classrooms for seventeen minutes to honor and pay respect to the latest school shooting victims. I was impressed with how the walkout was handled—making an announcement that the students could choose to participate in the walkout or remain in their classrooms. Some chose to stay. Others left. Outside, some formed circles and held hands. Others stood in small groups. Most were silent. All showed reverence.

The last time I walked out of a class was in the spring of 1970, when I was a freshman at the University of Missouri. When President Richard Nixon announced he was going to send troops into Cambodia, deepening the Vietnam War, protests were waged across the country. At my school, we walked out of classes in protest. When it looked like the protests might become violent, the school closed and we all went home. We were lucky; protesters at other schools, like Kent State and Jackson State, got shot by National Guard and police. Some died.

What’s the point of walking out, some people wonder. As I drove home today, I listened to a talk show host belittling the students who took that action. “What a waste of time,” he said. “What are they learning by doing that?”

We, as adults, have done little to address gun violence in this country. After each new massacre, we talk and pray and wish things were different. That’s not enough. Nothing will change until we change it. I believe more voices will help.

I applaud the students at Briggs and at every school who took action today, and there were thousands who did. But now I invite every student to take the next step, and this involves writing. Write down your thoughts, your fears, your ideas, and include them in letters to people who make decisions about school safety and about the way guns are regulated in our country today. Send letters to your principal, your school board, your local representatives, state representatives, your Senators and Congressman.

Your words matter. Change can happen. You can make a difference. Write on!