I’m visiting classes this week in Creswell and Oakridge, talking with students about informative writing, the kind of writing you do to share information. Note: This type of writing does not have to be dull and bland, like an encyclopedia or Wikipedia. It can contain interesting words and devices like metaphors, alliterations, and more. Remember to keep your audience in mind; they want to be engaged in your text. So, engage them! 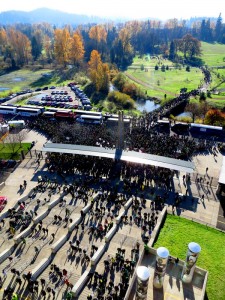 How are you going to engage these people in your writing? 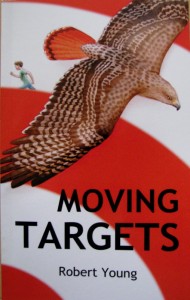 Anatomy of an Author Visit

I have been doing author visits to schools for nearly thirty years now. All have been interesting and enjoyable. Some have been memorable. My latest visit: Santiam Elementary School in Mill City, Oregon was one of them. Here’s why:

Great open space for large group (80) sessions. Lights were able to be dimmed when viewing images on the screen. Chairs for all. A microphone was an essential tool. 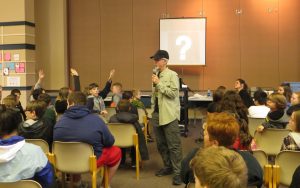 Small group sessions were used for follow-ups as well as for kindergarten and Life Skills classes. 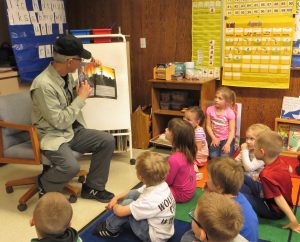 Teachers made sure students were familiar with the work I have done. Some prepared with activities. 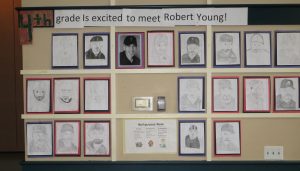 An art project: draw the author 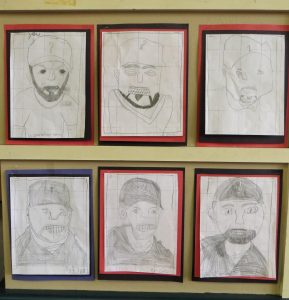 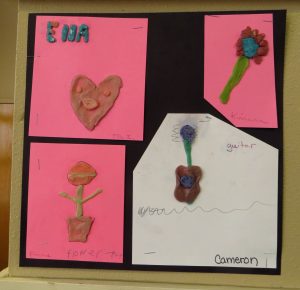 Students were enthusiastic participants in asking questions, sharing insights, and accepting the “Chicken Challenge” (create a better name for non-fiction). 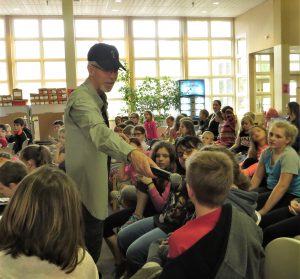 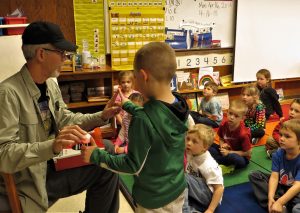 “Lighting the ball” with cooperation. Writers help each other. 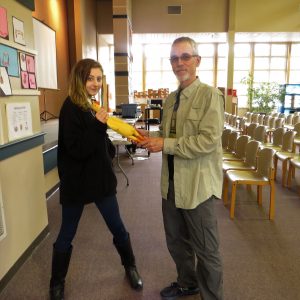 Many thanks to the students and staff at Santiam Elementary. Special kudos to Cindy McMahan, who coordinated the visit. Hope it was worth the effort!

The Magic of Willagillespie!

Man, were these kids ready! They had read the book and knew why everyone should know about A.C. Gilbert. Not only was he America’s most famous toymaker, he was a professional magician, Olympic champion, and the “Man who saved Christmas.” What a guy! And what a class!! I hope they all find their own magic. 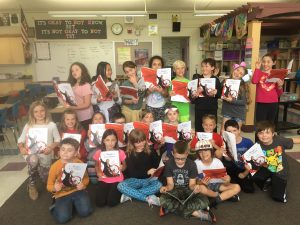 The Magic of A.C. Gilbert 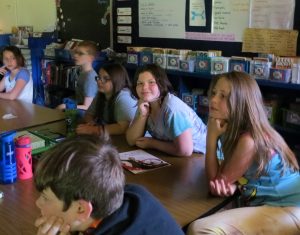 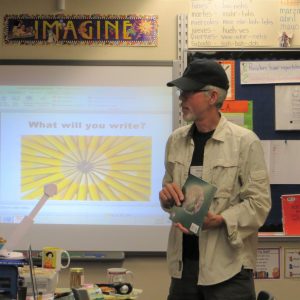 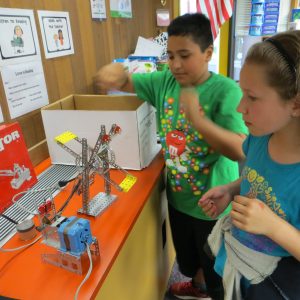 Visited my 4th grade friends in Mrs. Skoog’s class at Guy Lee Elementary today. We talked about writing and questions. Hey, I have one for you: Who was Guy Lee, and why was your school named after him? I want to know!

To see a photo of this cool class, follow the link below:

Taylor Worley, Youth Services Librarian at the Springfield (OR) Public Library recently reviewed Game Day with the Oregon Ducks. Here’s what she had to say about the book:

“Game Day with the Oregon Ducks” is a University of Oregon fan’s dream: a sneak peek into the lives of the players, coaches, staff, and volunteers that make Autzen Stadium come to life on game day. Author Robert Young presents the story from dawn to dusk, beginning with the clearing of Oregon’s morning fog and ending with the last recycling and locking of the gates. Photographer Jack Liu provides exceptional photographs from both well-known parts of the stadium and those secret rooms the public usually doesn’t see. A clean layout, balanced composition, and friendly narrative make this a good choice for children of many ages; even a precocious preschooler may sit to learn about why The Duck does push-ups so often! Fun bonus facts and trivia pepper the pages and compliment the extensive photography. While the appeal of such a title will be likely be limited to Duck’s fans, it is well worthy of their attention. “Game Day” provides an answer for a much-needed resource in local schools and libraries about this favorite team, while more seasoned fans will appreciate the nostalgia during off-season. Die-hard fans and budding enthusiasts will love this fun, informative, and endearing look into game day at Autzen Stadium. Go Ducks! 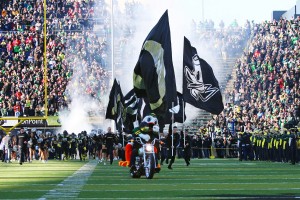 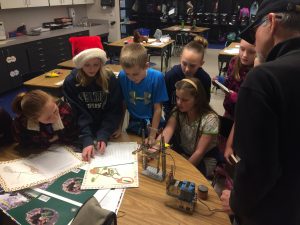 That’s what these fourth graders were considering (and giving up their recesses!).

Three Questions is a periodic feature of this blog. The focus is on three questions asked of everyday people involved in curious pursuits.

Wayne Stuebing is the subject of Three Questions today. Wayne is pressman, a printing press operator, who works at QSL Print Communications in Springfield, Oregon. Wayne ran the multi-colored press that printed my latest book, Game Day with the Oregon Ducks. He has worked as a pressman for 40 years.

1. How do you become a printing press operator?

2. What’s the future of the printing industry?

I think the industry will continue to shrink, but it won’t disappear because there will always be a need to have things printed. What will be interesting is who they’re going to have running the presses since a lot of the operators now are in their late 40s and 50s. Who’s going to replace them?

3. What are the worst and best parts of your job?

The worst part is the pressure, when jobs have to be done within a short time period. You can’t have a bad day; you have to be at your best everyday. The fulfillment is great, though, seeing the results of my work and knowing I did a good job.

Write From The Start

The first day of school is the most exciting…and the busiest day of the year. Amidst all the activity, make sure to have your students write on that first day. It will demonstrate your commitment to writing, and it will provide you with a sample of your students’ skills.

What to write? A couple prompts that have worked well for me have been: Write about something you did this summer, or something you would have liked to have done. Or: Welcome to this class. What would you like me to know about you?

After brainstorming possibilities, share your written response to one of prompts. This will establish you as a member of your classroom writing community.

Here’s my response to the first prompt:

The last few summers have involved a traveling adventure of some sort. Last summer I visited the Republic of Georgia and Turkey. The year before it was Colombia. Before that were Rwanda, Uganda, and Kenya in Africa. My son was the reason for these visits. He was exploring the world, and I traveled to meet up with him.

We had many adventures together. We hiked and biked and snorkeled. We visited museums, went on safaris, and tracked gorillas. We rafted the Nile River and got flipped into the water. Twice.

Although I stayed in Oregon this summer, I still had an adventure. It was a different kind of adventure, the kind I would rather not have had.

While staying in a hotel, I tripped over a chair in the middle of the night. It was a hard fall, and I felt a lot of pain in my rib area. The next morning the pain was still bad, so we went to Urgent Care. There they discovered I had broken ribs (five!) and a punctured lung. The lung was collapsing.

In the distance I heard an ambulance siren. It wasn’t until the paramedics came hustling in pushing a wheeled bed that I realized who the ambulance was for. Me! So, in addition to my first broken bones ever, I had my first ambulance ride this summer. The ride would have even been fun if the paramedics hadn’t been shoving things up my nose, poking into my hand and arm, and asking nonstop questions.

The emergency room at the hospital was a flow of activity. Doctors, nurses, technicians washed in and out of the room like ocean tides. I left with a plastic tube that a surgeon had cut into my side. The tube would equalize the air pressure and help my collapsed lung. 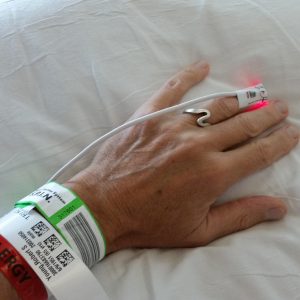 I spent the next five days at that luxurious hospital “resort.” Sure, there were some inconveniences, like when the nurse jammed a tube up my nose and then down my throat, the never-ending tests, being awakened every two hours during the night, and the person in the next room who moaned and screamed. But, the food was not bad (who was hungry?), the people generally nice, and I was able to change rooms to distance myself from “the moaner.”

I left the hospital with an appreciation of the people who work to help others, a little more knowledge about myself (especially my response to pain), and a summer plan for next year. And it won’t be anything like this year. Guaranteed.

Have a great writing year!